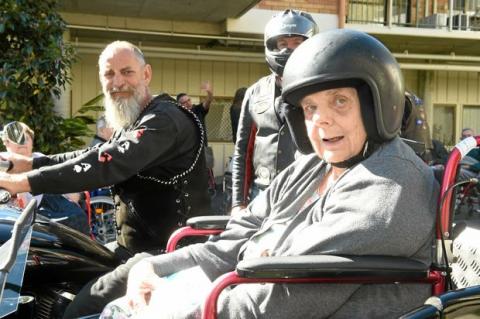 PHOTO ABOVE: Carlos Fien with Sunnymeade resident Dorothy Ffelan standing with the bike.

THE moment Olive Brown heard the sweet hum of a motorbike on Saturday she was taken back to a time when she used to race Montesa Hondas.

The 86-year-old was one of many Sunnymeade Park Retirement Village residents who were treated to a joy ride in Wheel Adventures' wheelchair accessible motorcycle sidecar.

"Oh it seems like a long time ago now," Ms Brown said.

"I used to race the boys in my Montesa. I'd wait until they'd come up next to me and I'd put my foot down and I'd say 'bye bye'.

"They couldn't catch me because I had a nice bike.

"My mother didn't like it, but my father would say to her to leave me alone because I knew what I was doing."

Like something out of a Coca-Cola ad, the elderly whizzed around Caboolture courtesy of Anglican Church-affiliated motorcycle club IV Aces member and Sunnymeade nurse Cindy Antonellie.

"We do a lot of charity events for all sorts of things like prostate cancer, breast cancer, down syndrome and we decided to do this because some of the residents talk about how they used to ride," Ms Antonellie said.

"If you sat there for the day and listened to them talk and what they did, wow it makes our lives sound boring.

"This is all I've done for the past 16 years and I wouldn't want to do anything else."

IV Aces hopes to continue the tradition with Sunnymeade as a monthly event.

"We used to do a day for an aged care in Cleveland, but most of our club members are all around Caboolture, so we decided to do charity rides for families here," Ms Antonellie said.

"There are plenty of families doing it tough in Caboolture."

Click on the attached link to see the Caboolture News Story

KEEP UP TO DATE WITH THE LATEST NEWS AND EVENTS